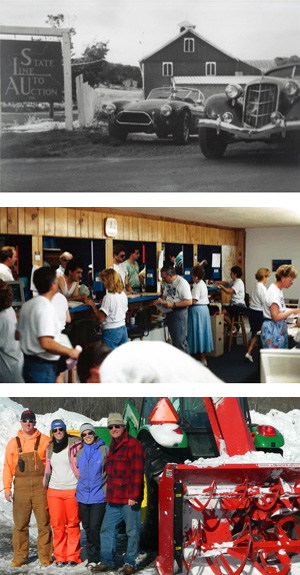 State Line Auto Auction has been independently owned by the Barber family since its founding in 1981 by Zora and Harry Barber. In 1983, Jeff Barber returned home to assist his mother and father. After Zora's death later in 1983, and Harry's death in 1984, ownership passed to Jeff in addition to his sister Jane and brother Dale. In 1994, Jeff became sole owner.

Now in its third generation of family ownership, Jeff and Jean Barber have included their children Kate, Beth, Emily, and Paul as partners. Beth, Emily and Paul are active in all facets of auction operation as State Line enters its fourth decade of being "The Best in the Bid-Ness". Kate is an attorney living in Washington DC and is admitted to the bar in New York state.

Additionally, State Line Auto Auction is a founding member of ServNet, a premier group of independent auto auctions from across the United States.